History of the RM of Ste. Anne 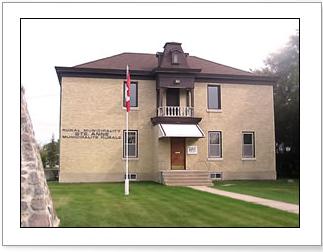 The Rural Municipality of Ste. Anne is one of the earliest settled areas of Manitoba. The first settlers arrived at Pointe-des-Chênes (where the oaks meet) from Quebec in 1856 in search of farmland. The initial settlement to the area consisted of 198 families and the main industry at this time was devoted to supplying lumber for the construction of the St. Boniface Cathedral, in Winnipeg.

The area underwent substantial change with the construction of the 850 kms long Dawson Trail - the first all-Canadian highway linking the East with the Prairies. The trail was surveyed in 1858 with construction taking place from 1868-1871. The trail was pushed through from Fort William to the Red River. A plaque situated outside of the Ste. Anne municipal building in the town of Ste. Anne tells the story of this first water and land route starting west from the Northwest Angle of the Lake-of-the-Woods through the present town of Ste. Anne to St. Boniface.

The community of Richer was originally called Coteau-de-Chenes, then it was renamed in 1901 to Thibaultville, until it was changed to Richer in 1905, after the region’s first postmaster.  The Local Urban District of Richer was first created in 1987.

Geographical Traits - Where the Prairies Meet the Canadian Shield 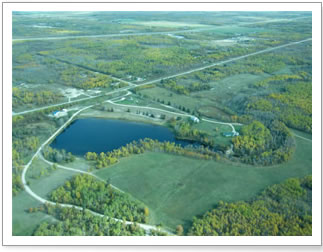 The RM of Ste. Anne encompasses a population of 5,584, with 607 of those residing in the LUD of Richer, based on the 2021 Census of Population.

Our Municipality contains extremely diverse topography. The western and central portion of the RM is predominantly level and of very high agricultural productivity. The majority of this area is cultivated and has long been used for a variety of agricultural purposes.  In addition to cultivated land, dairy, beef, hog, poultry and sheep livestock operations can be found in the RM of Ste. Anne, among other agricultural-related activities.

As we move eastwards, a clear transition from a fertile prairie ecosystem to a boreal ecosystem can be seen.  This eastern portion of the RM is largely wooded, hilly and of low agricultural productivity.  A large number of gravel, aggregate and peat deposits are located in this transitional area in addition to various recreational uses such as golf courses and campgrounds.

The Rural Municipality of Ste. Anne prides itself on being the place where the West begins, as the beautifully forested areas from Richer eastward provide a striking contrast to its neighboring prairies.  The RM of Ste. Anne’s slogan is therefore “Where the Prairies Meet the Canadian Shield”.

The residents of the Municipality have access to a number of amenities. The Town of Ste. Anne, which is completely surrounded by the municipality, hosts many establishments such as schools, a hospital, professional services, recreational services, financial institution, hotel, grocers, restaurants, automobile repair and hardware among others.

The RM of Ste. Anne is home to many golf courses and campgrounds in addition to commercial enterprises found in Richer, such a the grocery store, gas stations, hotel/motels, and restaurants among others.  In addition, Richer is home to a daycare, school, church, museum, and the Dawson Trail Park which is home to the annual Richer Rough-stock Rodeo among many other seasonal events organized by the Richer Community Club.